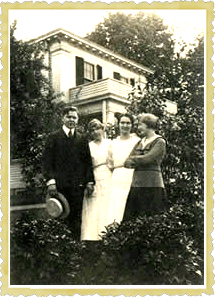 The Park Savoy Estate, like any historic site, has had many lives and has even more stories to tell from its past. Over one hundred years ago, it was home to one of the early Florham Park families. In fact, in the very heart of what is the present-day building, the bones for that 1870 house still exist. It was built in the Second Empire style, which was THE fashionable style of the day. The house and surrounding 150-acre dairy farm, formed the homestead of George W. Felch, the patriarch of a prominent early family of Columbia, as Florham Park was known during the 19th century.

In 1918, George’s son sold the house and much of the surrounding property to Edwin S. Marston, a New York financier, and then president of the Farmers Loan & Trust Company. The Marston’s remodeled, and enlarged the house, transforming it into a fantastic showcase mansion for the area, complete with fully enclosed tennis court and rose garden.

The Marston era was short-lived and in October of 1922, the property was sold to Samuel “Schimmy” Blume, and Jacob Weinberg of Newark. With this sale, a very new and different era in the house’s history began.

The 18th Amendment to the Constitution prohibiting the sale of alcoholic beverages across the United States was ratified in 1919. As a result, “prohibitions” and the illegal activities to circumvent it, were well underway when Blume and Weinberg purchased the Marston Estate. They opened the house as a Speakeasy, once again remodeling it from what it had been with the Marston family. The new owners took the name “Canary Cottage”, borrowing it from another establishment which had recently burned down. With the new name came a new clientele. To enhance the venue, they added a nine-hole golf course, as well.

The Canary Cottage, as the home was now known, became associated with a string of nightclubs and speakeasies owned by the New Jersey crime syndicate. Key figures in the syndicate were “Lucky” Luciano, “Longy” Zwillman and Willie Moretti. Zwillman was oft referred to as the “Al Capone of New Jersey”. He was also a founding member of the National Crime Syndicate and his name was often romantically linked with actress Jean Harlow.

The Canary Cottage was known to attract many legends, and well-known persons of the time, not least of which were Charles Lindbergh, and Charles Edison, son of inventor Thomas Edison.

For the next two decades, the nightclub continued to attract clientele from all over New Jersey to its doors for dancing and celebrating. After a period, it then continued as the semi-private Florham Park Country Club, which it remained until 1981.

In 1982, Alan Weinstein, a businessman and entrepreneur, who had grown up in the area, purchased the property and renamed it The Park Savoy. Originally opened as a restaurant & dance concept, Mr. Weinstein saw its potential for private celebrations and the home underwent yet another renovation. This time designed to restore the elegance and grandeur that had once been this 19th-century landmark. Period antiques moved in, and the landscape and gardens were restored.

In 2011, long-time business partners Barry Maurillo, Joe Maurillo, and Vito Cucci envisioned a new and re-born Park Savoy and purchased the Estate while making plans for a grand renovation. The partnership had previously re-created well-known Nanina’s in the Park, another, upscale catering venue, just ten years prior. With that experience, they knew what they could create at the Park Savoy and were energized and excited by the prospect of taking this turn of the century mansion and estate property to the next level. The newly re-created Park Savoy Estate, with its cozy fireplaces, exquisite & private bridal suite, ballroom boasting details only seen in the great mansions of Newport, and a view unparalleled in the area, enhanced by its great floor to ceiling windows, promises to be the venue that holds many fantastic celebrations! The Park Savoy Estate, newly re-created and re-born, fulfills Lucky Luciano and Longy Zwillman’s desire to create a unique venue where “the most prominent citizens… would come and we make ‘em feel comfortable.”